BCHS closed to the public until further notice 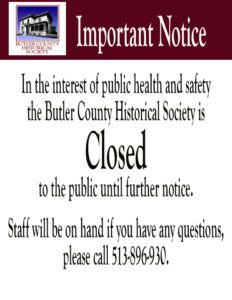 The Butler County Historical Society will be closed to the public, due to the corona virus. Staff will be at the BCHS for any research requests, so feel free to give us a call. We will be monitoring the situation closely, and will let you know when we will be reopening. Everyone stay safe and stay well!

The Butler County Historical Society is asking area residents that had relatives or family members who took party in the local effort to win women’s suffrage and passage of the 19th Amendment to consider donating photos, memorabilia and other historical artifacts for use in an exhibit. The BCHS is preparing an exhibit honoring the 100th anniversary of the ratification of the 19th Amendment in 1920 and is seeking artifacts such as flags, buttons, diaries, dresses and photos of local residents taking part in parades or public gatherings. The effort to give women the right to vote took decades but the exhibit will primarily focus on developments that occurred during the 1910 to 1920 decade. 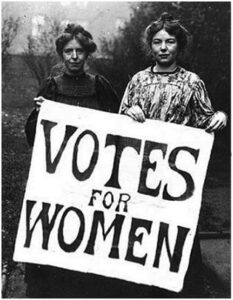 Persons who would like to offer photos, artifacts and family stories for the exhibit should contact Executive Director Kathy Creighton by emailing her at kathy@bchistoricalsociety.com or calling her at 513-896-9930. Even though the society, located at 327 North Second Street, Hamilton, is closed during February and March for remodeling, arrangements will be made to receive all contributions.

BCHS to Hold a Ghost Hunt

Beginning and advanced ghost hunters will have the opportunity to find out about the “spirits” thought to haunt the Butler County Historical Society’s complex at 327 North 2nd Street, Hamilton. Two special sessions are scheduled for January 25th, one at 6 p.m. and one at 9 p.m. Each two-hour session includes a tour which will introduce participants with the “spirits” believed to inhabit the Benninghofen House including pioneer leader James McBride (1788-1859), Wilhelmina Benninghofen (1858-1892), Civil War General Ferdinand Van Derveer (1823-1892), or Indian military leaders Blue Jacket and Little Turtle. 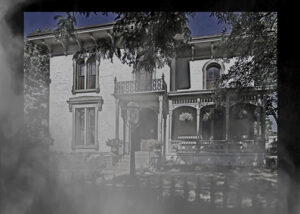 Tickets for each session are limited and cost $25.00 per person, paid in advance. A limited number of tickets for the 6 p.m. session are still available but the 9 p.m. session is sold out. Veteran paranormal investigators are encouraged to bring their own electronic devices, EMF meters, digital thermometers, and thermographic cameras to conduct their own investigation. The BCHS will have a number of divining rods on hand for people to use during the sessions.

Join the Butler County Historical Society as guest speaker Charles E. Rentschler of Hartsville , Indiana , presents the history of the companies formed by industrialist George Adam Rentschler, his sons and grand children. His talk, “How the Rentschler Family Shaped Hamilton,” will be at 1 p.m. on January 18 in the Emma Ritchie Auditorium at the Butler County Historical Society, 327 North 2nd Street , Hamilton . The program is free to the public. 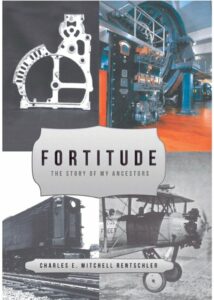 George Rentschler’s three sons also made substantial contributions to the development of the city. George A Rentschler, the speaker’s father, served as president of General Machinery Corporation and merged it with Baldwin-Lima-Hamilton in 1950. Gordon Sohn Rentschler worked to create the Miami Conservancy District after the 1913 flood and went on to build New York ’s National City Bank into the enormous CitiBank. Frederick Brandt Rentschler formed Wright Aeronautical Corporation, Pratt and Whitney Aircraft Company and, with partners Chance Vaught and William Boeing, United Airlines.

Speaker Rentschler has worked as a machinery analyst, management consultant, production manager, and served as president and CEO of Hamilton Foundry and Machine Company from 1985 until the firm ceased operations in 1997. After retiring in 2009, Charles researched and wrote The Cathedral Builder: A Biography of J. Irwin Miller, the long-time CEO of the Cummins Engine Company. In 2018, Rentschler published Fortitude: The Story of My Ancestors in which he describes the contributions and history of the Rentschler family. Copies of Rentschler’s book will be available purchase and author signing after the program.

BCHS Names New Officers and Board Members for 2020

The Butler County Historical Society will begin 2020 with a new slate of officers when the Board of Trustees meets on Thursday, January 16. Brian Smith will return for a third year as the board’s president. He is a Ross School District English teacher and is entering his sixth year as a board member. Sara Butler, Miami University Art Department Professor Emeritus, will be the new vice-president. Butler rejoined the BCHS board in 2019 and previously served as a trustee from 2011 to 2017.

Greg Young, retired superintendent of the Ross School District, will serve as board treasurer for a second year. Young served as board president for three years when he was on the board from 2007 through 2012. Patty Fawns will be the board’s secretary for a second consecutive year. She previously served as a board trustee for six years. 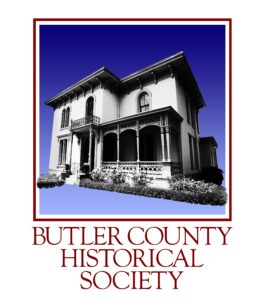 Returning board members are Liesl Bauer, B. Gayle Niehaus, Joanne Williamson and Katie Wright. Kathy Creighton remains the society’s Executive Director, a position she has occupied since 2010. Christina Beckett, administrative assistant, and Butch Frederick, curator of the Soldiers, Sailors and Pioneers Monument, will continue in those positions.

The society’s Board of Trustees oversees the BCHS programs, exhibits, operations, and efforts to preserve and interpret Butler County’s rich heritage. During 2019, more than 10,000 people visited the society to conduct research, tour the Benninghofen House museum, attend a lecture series program, visit an exhibit, or attended a Speaker’s Bureau presentation. As a non-profit organization with no routine government support of any kind, the BCHS relies on generous volunteer and community support and financial gifts to help it continue the society’s increasingly important civic contributions to increase public awareness of the county’s past.

Butler County Historical Society members are invited to attend a traditional holiday Christmas celebration to be held on Friday evening, December 6, from 6 p.m. to 9 p.m. The event will be held throughout the society’s complex at 327 N. Second Street, Hamilton and include a variety of typical holiday refreshments, cookies, and beverages. Non-members who wish to attend the event can join the society during the evening. People planning to attend are requested to RSVP.

The Benninghofen House will be decked out in traditional Victorian holiday attire and several Christmas trees decorated by the society’s Master Gardeners will be located in the house and the Emma Ritchie Auditorium. Homemade Christmas cookies, mulled wine and apple cider will be available during the 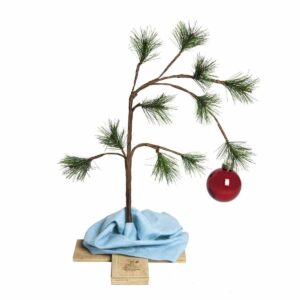 evening beginning at 6 p.m. Kathy Creighton, BCHS Executive Director, will present an entertaining biography of Santa Claus and tell the history of the holiday classic cartoon “A Charlie Brown Christmas” at 7 p.m.

Members will also have the opportunity to enjoy an ongoing mini-display of antique toys and Christmas Cards in the Emma Ritchie Auditorium. Also on view is an alpine winter scene including several ski slopes, 10 porcelain lighted buildings, more than 100 trees and nearly 100 skiers, skaters and snowboarders, all in small scale. The entire village is part of a collection of porcelain buildings owned by BCHS board member Richard Piland.