The Butler County Historical Society will open a new exhibit presenting many of the traditions of Victorian era funerals next week. The exhibit is free to the public and will open in the society’s Benninghofen House, 327 North 3rd Street, Hamilton, on Tuesday, October 1 and run for six weeks until November 9. 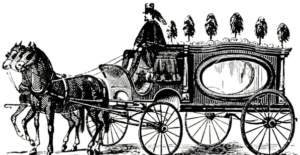 An authentic Victorian “laying out table” holding a coffin provided by the Charles C. Young Funeral Home is the central feature of the exhibit on display in the museum’s parlor. Several traditional floral arrangements, a wide collection of period funeral invitations and memorial cards can also be examined. Women’s mourning clothes worn during the Civil War and early 20th century, a funeral urn and a home embalming kit are also on display. The exhibit tells the story of “The Empty Chair” and explains the original meaning of the phrase “saved by the bell.”