Go see the inside of the Soldiers, Sailors and Pioneers Monument this weekend!

Go see the inside of the Soldiers, Sailors and Pioneers Monument this weekend!

Go see the inside of the Soldiers, Sailors and Pioneers Monument this weekend 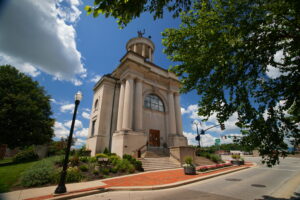 If you haven’t visited the Butler County Soldiers, Sailors and Pioneers Monument that was built to honor those who have sacrificed their lives in service to the country, now is the time to see it.

And if it’s simply been a while, go again … things have been changing there as the monument celebrates one year with its doors open again after having been closed to the public for some time.

The monument on Front Street in Hamilton is open on Memorial Day, and if you can’t make it then, check it out from the hours of 10 a.m. to 4 p.m. on Thursdays, Fridays and Saturdays. Those are the building’s regular hours.

The structure’s curator, Butch Frederick, is there during the open business hours.

Visitors to the monument will see the names of thousands of soldiers engraved on marble walls. They will also be able to see a small firearms display, information on the county’s involvement in conflicts up to the Spanish American war, the history of the construction of the building and the Billy Yank statue.
Exhibits inside the monument are designed to inform and educate people about Butler County’s history, wars and personal stories, according to the Butler County Historical Society, which maintains it.
Thanks to Butler County Connect for their coverage!
bchsadmin2019-05-24T18:34:52+00:00