Butler County Historical Society members are invited to attend a preview of the society’s upcoming exhibit focusing on the men, women and industries that were involved in America’s effort to win World War II. The member-only event will be held on Friday evening, May 3, beginning at 7 p.m. in the Emma Ritchie Auditorium of the society’s complex at 327 N. Second Street, Hamilton. Light refreshments will be served. Non-members who wish to attend the event can join the society during the evening. People planning to attend are asked to RSVP. 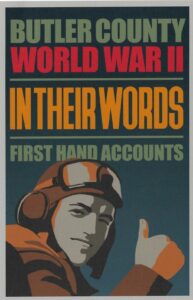 Liza Vance, history graduate student at Northern Kentucky University, will describe her work in developing the society’s “Butler County World War II Soldier’s Stories” exhibit that will open to the public on June 6, the 75th anniversary of D-Day. The exhibit will present the first hand accounts of men and women who served during the war. Vance spent hours interviewing several soldiers that experienced the war while at Pearl Harbor, Saipan and during the D-Day Invasions in Europe. She also compiled much of the information presented in the exhibit, which is her “Capstone Project” that completes the university’s requirements for her Master Degree in Public History.