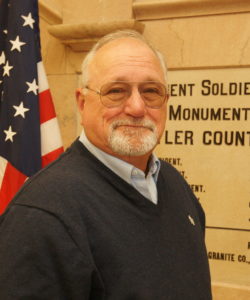 The Butler County Historical Society has selected Butch Frederick to serve as the new curator of the historic Soldiers, Sailors and Pioneers Monument on Front Street, Hamilton. Frederick will be responsible for the military uniforms, records and artifacts in the extensive collection housed within the monument. The Butler County Historical Society will be in charge of the day-to-day operations of the facility and develop exhibits and programs for monument visitors through a cooperative agreement with the Butler County Commissioners.

Frederick and a team of historical society board members and volunteers headed by Jack Armstrong and Brian Smith are preparing the monument for a Memorial Day opening on May 28th when visitors can see the names of soldiers engraved on the walls and the beautiful stained glass windows. When the monument re-opens, with regular hours on Thursdays through Saturdays from 10 a.m. – 4 p.m., it will initially appear as when it first opened in 1906. Exhibits will be added and frequently changed to honor Butler County pioneers and veterans.

The new curator was born and raised in Hamilton and is a graduate of Garfield High School, Class of 1965. He enlisted in the U.S. Air Force and served four years as an Intercept Intel Analyst, achieving the rank of Sergeant. Frederick retired from Champion International after a career of thirty years. He is the current commander of the Veterans of Foreign Wars, Post 1069. He and his wife have two grown sons and live in Fairfield.